Please save the date for our Annual Meeting and program, which will be held on Sunday, May 19th, at 1:00 p.m. at the Nipmuc Regional High School in Upton. The Annual Membership Meeting will begin at 1:30, followed by presentation of the 2019 Community Spirit Award.

Doug and his office, NITHPO, work on the protection of Indigenous ceremonial stone landscape in the Northeast with three other federally-recognized Tribes: the Wampanoag of Gayhead-Aquinnah; the Mohegan; and the Western Mashantucket Pequot. All these Tribes are part of a larger group called USET (United South and Eastern Tribes) that is comprised of 27 federally-recognized Tribes from Maine to Texas. Doug has been doing this work for over 20 years. 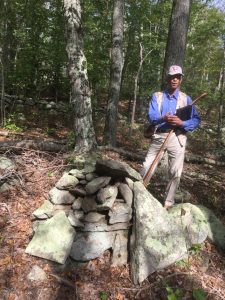 The Indigenous Ceremonial Stone Landscape surrounds us in New England, often hidden in plain sight in the forests and fields. Most people who come across enigmatic stone structures don’t know that some are remnants of a network built by Indigenous Americans for ceremonial and other purposes. Doug Harris, Deputy Tribal Historic Preservation Officer for the Narragansett Indian Tribal Historic Preservation Office, has been Tribally certified in the identification of ceremonial stone features for 16 years. He presents an illustrated talk showing various types of Indigenous ceremonial stone features. Ample time provided for questions about structures audience members know of.

The public is invited.

Current members are eligible to vote at our short annual business meeting, at which we elect our Board of Directors and conduct other business.